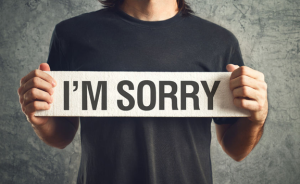 The secret to Solving Relationship Issues, put your ego aside. The art of apologizing is a tricky one. Sometimes we can’t admit to being in the wrong, and other times we just don’t think we’re wrong at all. This age-old dilemma turns into an ego-versus-relationship saga, a battle that strains and drains your bond.

In short, it’s okay to sacrifice mere pride in lieu of a sincere apology – the operative word being sincere. Giving your partner the respect they desire (and deserve) is more rewarding than feeling like you’ve won. Why? Let’s look at the pros.

Firstly, a sincere apology makes your partner feel heard and cared about, feelings they will reciprocate post-I’m sorry. Apologizing also drastically cuts the amount of time you’ll spend arguing, resenting and being angry over the predicament at hand.

There’s also the fact that sometimes, apologizing is the right thing to do. It’s a small social cue, sure, but asking for forgiveness shows humility and modesty. Apologizing doesn’t only appease your mate, but will also make you a better person.

Understanding why it’s important to apologize will help you maintain any kind of relationship, whether it’s with a lover or a friend. So next time, put your agenda away and give your partner the apology he or she deserves. It’s what you would want, isn’t it?